Nissan Leaf gets special mention here, because that's the most popular EV on the market as of May 2015. There's lot to like, such as bigger and earlier to market (by 5 years). It also has the option of 6.6kW L2 charger compared to SparkEV's 3.3kW. If L2 is all there is, Leaf wins. But when it comes to quick charge, SparkEV does far better.

There was Leaf owner charging next to me. I recorded the charging rate, and it slowed down very quickly. It started to slow down after less than a minute. It seemed to be slowing faster over time, but I only recorded two data points (this ain't Leaf blog!)

Leaf's DCFC slows down to half as fast as SparkEV's rate. Is this Chademo vs CCS or Leaf's fan cooling vs SparkEV's liquid cooling or combination or? But the end result is that SparkEV kicks Leaf's butt in fast charging. This could have big implications when driving longer distances: can one drive over 1000 miles in a day with EV? Theoretically, SparkEV can barely do it, but not Leaf. No one can do that with So Cal traffic anyway, but it does make Leaf bit more of a hassle than SparkEV.

I suppose I could've taken multiple data points (video?) and do a plot of kWh vs time and find curve fit (linear? 1/t? e**-t?). But this is SparkEV blog, not Leaf blog. If Leaf owners want to find out how inferior their DCFC is compared to SparkEV, let them gather / analyze more data. I hope some do, because I am curious how much quantitatively suckier Leaf is compared to SparkEV.

Since Nissan started "no charge to charge" program where they give free 30 minutes of DCFC to Leaf owners, this has caused huge problem for public fast charging. Since it's free for 30 minutes regardless of car's state of charge, people would let the car sit there for 30 whole minutes whether they need it or not.

If 30 minutes actually deliver "FAST CHARGE", the car would be fully charged, and other people can charge their car. But in case of Leaf, charging slows down drastically as discussed above. How slow? I've seen couple of Leaf charging at almost 2kW (18 seconds for 0.01kWh) at 95% SoC. People were still hanging around and having other people wait when they could get faster charge from their L2!

I made some observations on few Leaf. It seems Leaf starts off at 41kW. 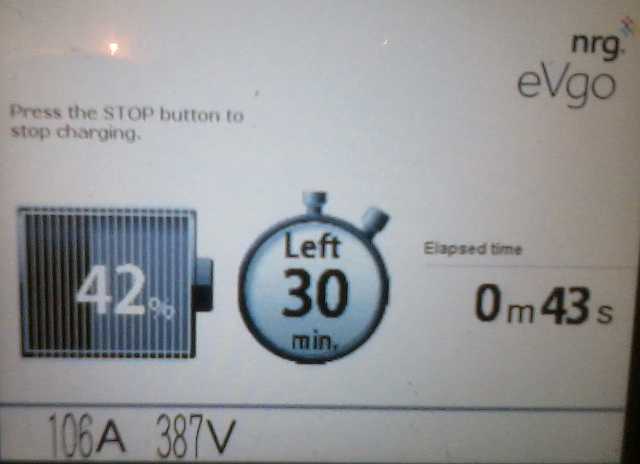 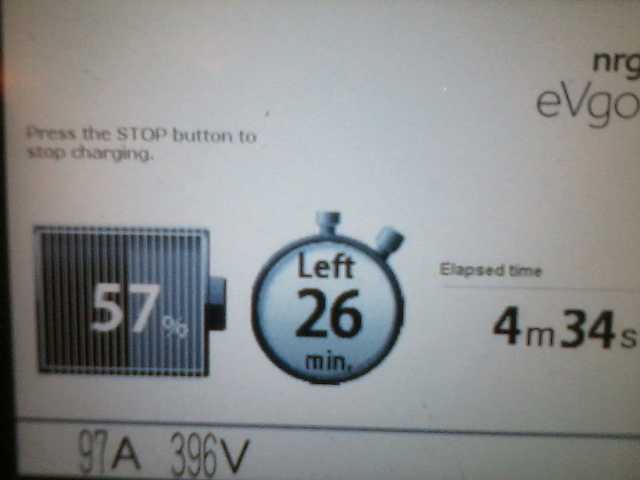 This screen shot for 30 minutes is from another Leaf that I happened to see. I wasn't waiting around for 30 minutes to see how quickly Leaf drops. Yeah, it's not apples to apples, but you get the idea. At 95%, it was 10A, charging rate of less than 4 kW, even slower than L2! The Leaf driver would be saying "hey, why not? it's free for me, sucks to be you to be waiting" 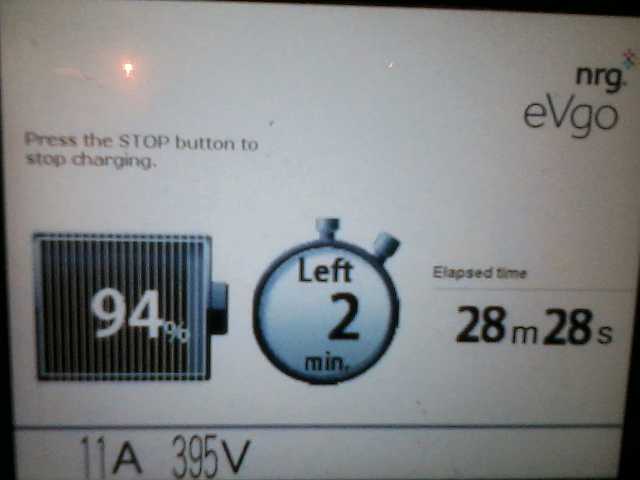 If there's one thing that'll kill EV adoption, it's this kind of crap where you have to wait 2 hours to charge. What does it matter if it takes 20 minutes to get 80% when other people take 30 minutes each to charge, whether they need it or not. Nissan may have done well with EV by releasing the Leaf, but it is doing a fine job of killing EV with their crappy charging system and "no charge to charge" program.

I ran into a Leaf driver who deliberately chose to use dual head charger instead of Chademo as she was pulling in. When I asked her politely to move her car we both can charge simultaneously, she said she didn't want to bother! Scroll down in link below to see what happened.

Below is a video of inconsiderate Leaf charging at 89% (she started at 76%!) at about 6 seconds for 0.01kWh (about 6 kW speed). Either Leaf drivers are unaware that fast charging is slower than L2, or they're simply evil people taking pleasure in making other people wait, even if they have a wait. I used to think it was the former (idiot Leaf drivers), but after this experience, I beginning think it's the latter.

There's an old saying about beating a dead horse. Actually, the only time to beat a horse is when it's dead. In that regard, here's another story about crappy Leaf fast charge. When I pulled up to this charger, Leaf was plugged in, but 30 minutes had expired. The driver, as usual with these no charge to charge Leaf drivers, was nowhere to be found. After all, why bother unplugging after you're done when it's free? They could take up the fast charge spot and prevent others from using it forever, and there's nothing eVgo can do to encourage them to get off the fast charger spot (eg, charge more money).

Leaf took 30 minutes to get to 89%, but only took 9kWh. On average, that's 18 kW. Assuming Leaf usable battery capacity is 22 kWh (probably less), 9kWh represents 40%. Since it stopped charging at 89%, we can guess that Leaf started charging at 50%. Well, at least the fast-charger-spot-taking-douche didn't start when he's at 80% and go away for hours like some other Leaf drivers.

I took SparkEV to 89% SoC, just like Leaf using the same charger to do some comparison.

SparkEV took 20 minutes to deliver 13kWh, On average, that's 39kW, more than twice as quick as Leaf. In addition, I started with about 12% SoC (had 10 miles remaining), which means SparkEV added 77% in 20 minutes. Had I let SparkEV sit for entire 30 minutes, it would've reached beyond 100%.

Leaf doesn't have fast charging; they're simply made to take fast charge spot while slow charging! Thank you, no charge to charge for making all of us waste our time!